I celebrated my second birthday today with more bravery tests - apparently I excelled at the 'umbrella' test, but She is easily impressed since I was looking in the other direction at the time.

Anyway, She took a birthday mugshot of me to mark the occasion. 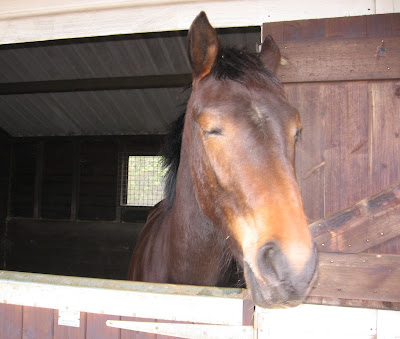 That's typical - She pressed the shutter just as I had my eyes shut.


Petal's diary ends here because this and Braveheart's blog were written to entertain my ailing father who has since died.  May he rest in peace.
Posted by Petal at 14:10 No comments:

One day I was led out of my stable and towards the arena only to find that the arena had been filled with strange objects.  I was very surprised when She seemed to expect me to go into the arena, but She said it was a bravery test.  Not wanting to let myself down, I agreed to go in and inspect the objects.

After going through all this I was given a Bravery Award!  Here I am modelling it.  Notice how Hanuman hasn't won an award and he isn't wearing a smart leather headcollar either.  She says that I am very special and should get used to winning awards.

Officially, I am now 2 years old, and She thinks I should be starting some Training.  Actually, Training turns out to be a complete doddle.  First I had to go into the arena and walk over some poles - piece of cake!


The next time I had to go into the arena and walk over a crackly piece of plastic aka tarpaulin.  I wasn't too sure about it at first and was wary of the crackling noise, but my concerns were quickly overcome by the promise of a peppermint.  The video below is in real time and shows that from the beginning to walking confidently over a tarpaulin was less than five minutes.

What neither of these videos show is that at the end of both sessions, I dug my toes in at the gate and refused to leave the arena.
Posted by Petal at 08:24 No comments:

Hanuman has been cooped up in a little pen the last few weeks, and now he has got fed up.  I have tried to help by digging a hole outside the fence, thinking that perhaps I could make a tunnel and he could escape that way.  But, before my tunnel got deep enough, he started doing a lot of cavorting and tantrum throwing, so much so that She became fearful that his feet would fall off.  Finally, She decided to bite the bullet and put us all back out together and pray that we wouldn't rush madly about.
Don't know why She thought that, because we have all been very grown up.
Here we are, chilling out together, reunited at last. 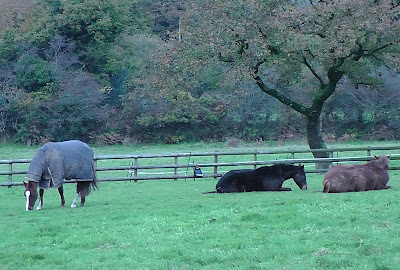 Hanuman is slowly getting better and is now allowed to wander round the yard all day and doesn't have any medicine in his food any more.
Posy and I have to spend all day in the field, which would be OK if it weren't for all the midges.  I have been given special costumes to stop the midges biting me.  I found that you can do lots of activities with the neck covers.  I was able to make two long tears in the the fabric, chew off the fake fur pad, remove the velcro attachments and gnaw the teeth off the zip.  I did all these achievements whilst still wearing it!  She does not seem impressed and two neck covers later, I was given one with no zip which attaches to your head, giving you comedy donkey ears. 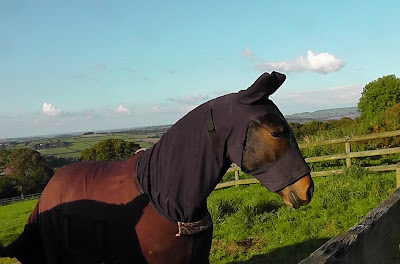 Some of the fabric fell off the face part, I can't think how that happened.  Today, some more fabric fell off the face part and then the whole hood somehow got pulled over my face and everything went black.  I had to stagger around, completely blinded by my costume, for some time before I was rescued.  She says I have run out of midge costumes and will just have to be bitten now.

Hanuman has been confined to his stable for weeks, but now he is allowed to stagger round the yard for a bit during the day.  I was allowed in the yard also, for the purposes of socialising.  Of course, Hanuman just went into my stable to see if I had left any food behind, so I snuck into his stable to check for evidence of Special Treatment.

There was the remains of wet hay, which Posy says is Special Food which must be better than what we are having, and, to make things more unfair, we are having to go outside and pick grass for ourselves, whereas Hanuman just stands there and gets food brought to him.
Furthermore, his stable contained Executive Toys, whereas we have none.  I spotted a ball which has a handle you can hold when you get tired of kicking it around.
There was also a plastic apple on a piece of string which you could bash and make a noise. 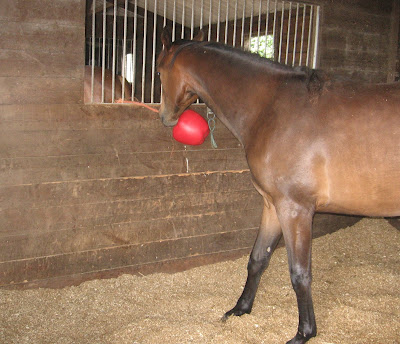 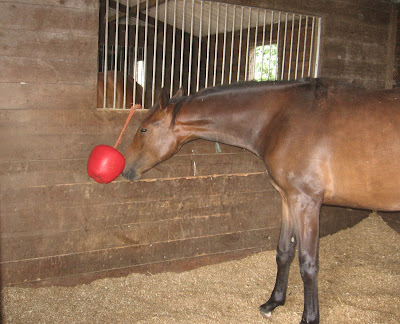 All this evidence points to clear favouritism.  Posy and I now appear whenever She attends to Hanuman and insist that we get some of the special foodstuffs that he is getting, and quite right too.
Posted by Petal at 14:27 No comments:

Lately the weather has been uncharacteristically sunny and the grass is growing like mad and is very delicious.  Posy and I have eaten so much that we have to rest from time to time.  Hanuman, however, just keeps on eating and has become very tubby.  She says that if he was human the NHS would have fitted him with a gastric band ha ha.  She is not laughing now though because suddenly his feet started hurting and the vet had to be summoned.  His feet are painful, apparently, because he is a Fat Boy Who Has Eaten Too Much Sugar.  His penance is that he has to be confined to his stable and given meagre rations of soaked hay.

He is not happy and has been continually kicking his door in protest.  As a result, She has decided that we, too, should be confined to the yard to keep him company during the day, before he permanently damages himself, or the stable.

Posy is sure that he is getting Special Treatment and that the food he is getting must be much nicer than ours.  She keeps putting her neck over the door and trying to take the food out of his mouth.

I have tried to cheer him up by pulling faces outside the window. 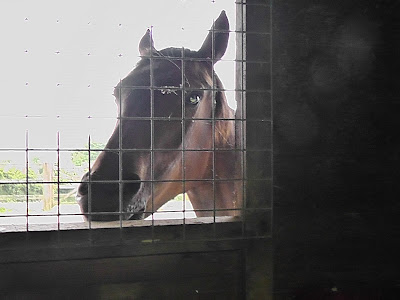 But in the end it is rather boring being stuck in the yard all day.  I have already vandalised the drainpipe and now I am busy playing with the log pile. 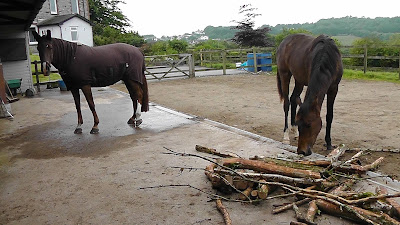 I think I may try to dismantle the fencing next.

Petal
I was born on 15th April 2015. My mum is Posy and my dad is Cyden Cadans. I want to be a ballerina when I grow up.